Hello Again! Summer for me has officially begun, and with it comes my return to the Sunshine State and the sea (*ahem* ocean). I’ve traded in flat anonymity for vitamin D, but forgot what running in this weather is like: salty suffocation. Hot yoga is retreating further down my “to do” list until I go back to a place air conditioning is optional. In the meantime, I’ve filled my time reading E.L. Doctorow’s Ragtime, and at the moment, I’m a bit enamored with everything Edwardian (or whatever Americans call the period from 1901-1915- is it the progressive era? Or did that really center around Wilson? Please feel free to comment). Now that my hair is long(er), expect white frocks and Gibson Girl simpers and fervor for the World’s Fair. This outfit doesn’t really encompass that look, but it is a good mix of of midwestern conservatism (reminiscent of Rodgers and Hammerstein) and vintage sea-going attire.

Thanks you to all of you who have stuck by me in my exam-induced absence. Don’t forget June 1st marks the next eccentric glamour link-up. I hope you’ll stop by and share your style!

Other things in the works include a (very unqualified) make-up discussion, subscription box review, discussion of my new favorite TV series (from Australia, no less!), and lots more. Let me know if you’re interested in anything in particular. I am officially back on the grid.

Call it the prying of destiny, but I am intrigued by exceptional and eccentric women.* I seem to unwittingly scout them out like a puppy on yesterday’s undies– if there is one to be found in the vicinity, the endeavor will inevitably end in my unconscious salivation. What starts as an innocent peruse of Huff Post unravels into the riveting tale of The White Mouse and her gestapo-stumping schemes, a 5-million franc bounty, and the bicycle ride from Hell. I can hardly look for suitable covers of Gene Krupa and Anita O’Day’s “Tea for Two” before I’m thrust head-first into the American tragedy of the Beale family, a Palm Beach modeling gig gone awry and the dilapidated East Hampton home of numerous opossums, raccoons, cats, and, most notably, a mouldering mother riddled by the fear of burglary.

Beset by such a burden, I have decided to unencumber myself in the only way we bloggers know how. Thus, using primarily Wikipedia as a source (and pictures I DO NOT OWN**), I will share some of these weird and wonderful stories of awe-inspiring women with you, beginning with our titular hero, Bertha Benz. 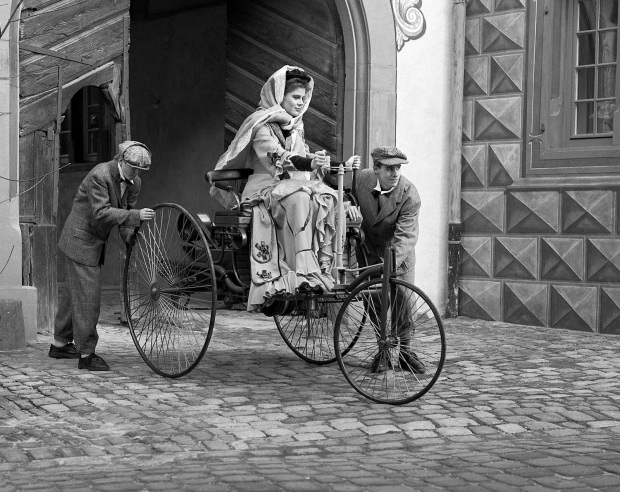 Now you may be whispering to yourself (like a maniacal villain), “Benz, Benz… I feel like I’ve heard that name before,” and in this case, you would be right. The “Benz” you associate with Mercedes (no connection to the Count of Monte Cristo), began with none other than the husband to our Bertha. But before we come to the car which forms the second object of salivation mentioned in this post (see below for a model “Ford” to frame the third), there was a unmarried trollop in the Grand Duchy of Baden investing in the hottest inventor on the market. While that may be a large exaggeration, it is true that the unmarried Bertha (Ringer, as it were) invested a large sum of her own money into the workshop of Karl Benz, and his vision of a motorwagen. This money made it possible for Benz to patent the first automobile, not to mention the real great American pastime (and subject to German law, after they were married she no longer retained an investing power to her money; after all, she had a husband to take care of that while she saw to their five children).

Nevertheless bored with nappies, Bertha decided to invent the modern marketing industry and the brake lining all in one fateful afternoon. Without telling her husband or the authorities (*gasp*), she decided to take the new motorwagen out for a spin– but not one of the short trial runs they had hithero engaged in– Bertha decided to drive 66 miles with two of her sons to visit her mother. Or could her plans be more sinister…

A considerable number of people in 1882 had never seen a car. Thus, on her dawn to dusk moto-cruise, she did things like clean a fuel pipe with a hatpin and insulate a wire with her garter (#justgirlythings), not to mention her various stops along the way, exposing her life’s investment to the general public. By the time she reached her mother’s house, she had caused quite a buzz over her new decidedly-not-a-Radio-Flyer wagen, and she had become the first person to “drive an automobile over a real distance” (for all the Kerouac haters out there, this is where you pin the blame). Her marketing stunt also garnered a great deal of publicity, which helped to create a commodified demand for the new invention. Investment Genius, Test Driver Extraordinaire, McGyver-prototype Inventress, and Marketing Wizard- need I say more?

*It’s not that I have anything against exceptional and eccentric men (*cough Harrison Ford*), there’s just a 99.9% less chance that I will become one with the passing of time.

**so don’t link back to me, link to the link I’ve linked to- respect where it’s due, right? Speaking of which, the featured first image can be found here.

Happy New Years Again! Though yesterday was devoted to the launch of my new Eccentric Glamour link-up (open through tomorrow!), we wanted to continue celebrating the advent of 2015 by paying an homage to one of my favorite movies: Breakfast at Tiffany’s. Specifically, we chose to recreate the scene where Holly and Paul/Fred steal two masks from the Five and Dime (after spending a long morning having a ring engraved at Tiffany’s) and run all the way home. The scene always seems so full of vibrance, life, and adventure. Holly and Fred are only beginning to acknowledge their feelings for one another, and as they run from the store, it’s like they are making the first steps into their new future (a good goal for 2015, we think). We hope we can bring you a better year full of excitement, mystery and panache (even if my European tour is over).

Also, each New Year’s I make a list of 50 movies I’d like to see in the new year. If you have any you think should make the list (and could compete with Breakfast at Tiffany’s), please comment below! 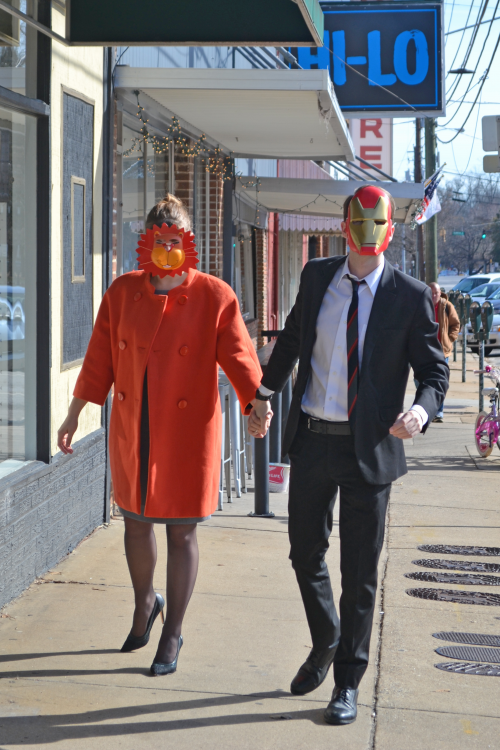 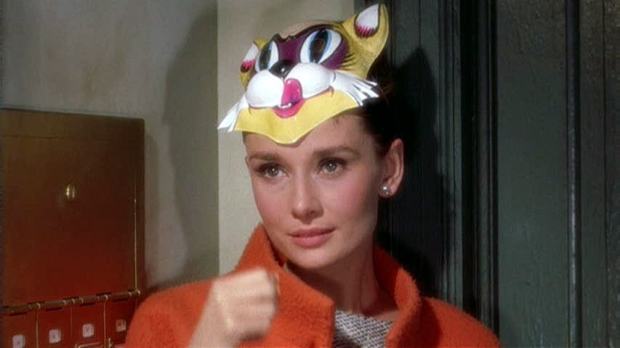 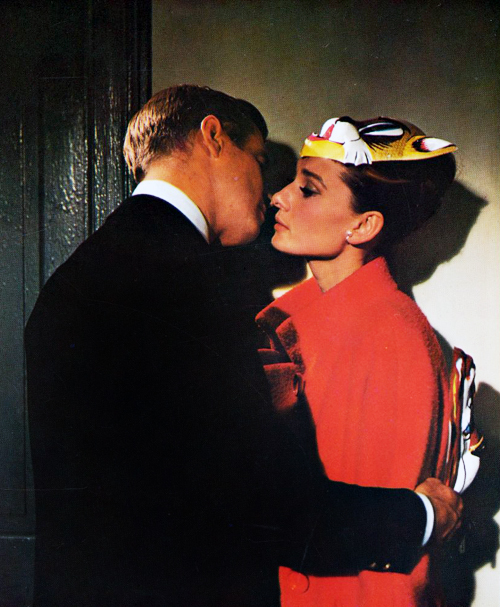 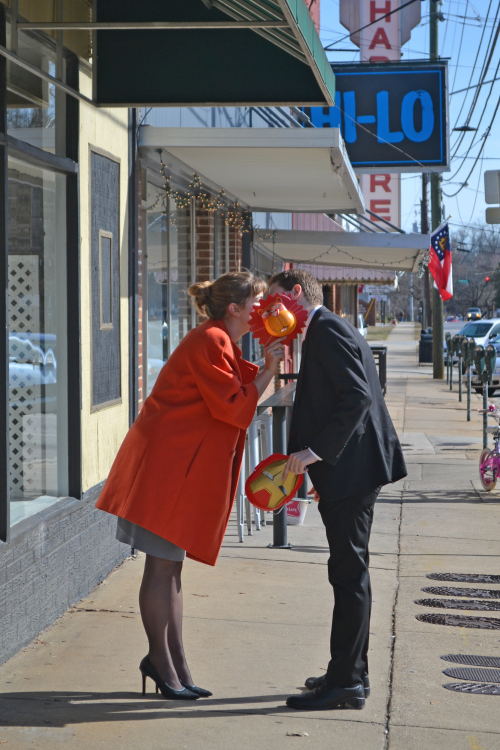 **I do not own the rights to any of the Breakfast at Tiffany’s screenshots, so use them at your own risk, and please do not link back. Thanks! 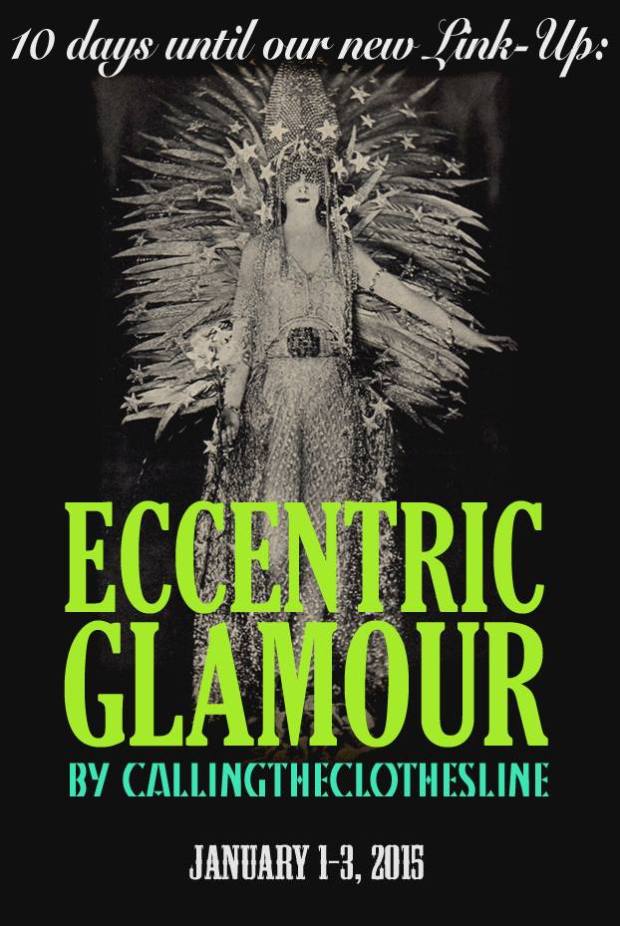