“Taking intellectual property, traditional knowledge, cultural expressions, or artifacts from
someone else’s culture without permission. This can include unauthorized use of another
culture’s dance, dress, music, language, folklore, cuisine, traditional medicine, religious symbols,
etc. It’s most likely to be harmful when the source community is a minority group that has been
oppressed or exploited in other ways or when the object of appropriation is particularly sensitive,
e.g. sacred objects.”

Most recently notable, Native American headdresses are sure to stir the waters (whether from H&M or Victoria Secret). Noticing the attention these stunts garner, Urban Outfitters almost bi-annually produces a controversial headline-grabbing garment of some sort, and while not all of these (*ahem* Kent State) involve cultural appropriation per se, it is certainly a tick mark on their list of tactics. However, one of the most high-profile perpetrators of cultural appropriation, is none other than Chanel designer (and superstar himself) Karl Lagerfeld (here is his headdress).

Arguably one of the most productive designers today, Mr. Lagerfeld works as creative director for Chanel, Fendi, and his eponymous line, resulting in quite a few shows when you start to tally, not to mention, the larger-than-necessary number of looks Lagerfeld usually incorporates in each. Lately, he has adopted the practice of designing Metiers D’Art shows (acting kind of like a pre-fall collection) around their upcoming locations (Dallas, Mumbai, Edinburgh, and Austria to name a few). In Dallas, we were given boots, buckles, and prairie skirts galore. Edinburgh brought kilts, puffed sleeves, and collar bibs. Mumbai sported tikkas, lots of gold flourishes, and sarong sandals (despite preparing for autumn weather). And about a month ago, we received Lagerfeld’s “take” on Austria.

The question I’d like to explore is how Lagerfeld’s “take” on different cultures co-exists with cultural appropriation (for better or worse). Further, why has there been no decriers of cultural appropriation accompanying the Salzburg release? What makes us feel (righteously) that headdresses are offensive, while the Austrian — shall we call them yodeling? — hats are just cultural appreciation? How does the majority/minority influence constitute our opinion (and from what perspective do we consider what makes a minority). Does Lagerfeld’s German ancestry provide him an out in regards to Austria? 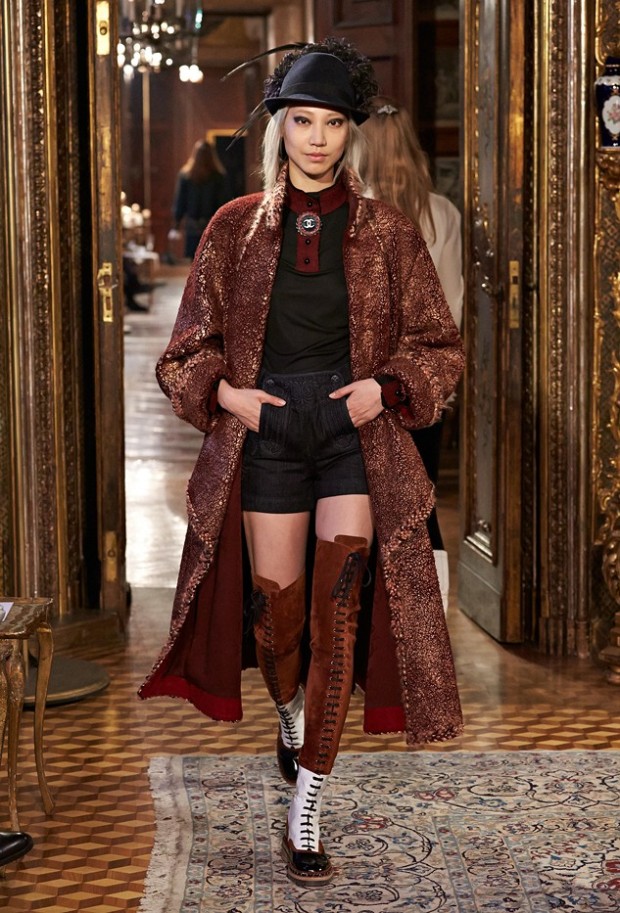 So why would cultural appropriation or borrowing be a problem? It would seem that fashion, that steadily evolving amalgamation, depends on borrowing as a form of transformative imagineering to survive… Yet, cultural appropriation can be interpreted as the wealthy majority robbing the disenfranchised of their only commodities (and meanwhile misrepresenting them). It’s also a bit of a power trip, since cultural appropriation serves as a reminder of those who have been in power versus those who were historically marginalized. You can read here for more information.

So what does Lagerfeld do that would make him the exception to the rule (besides his signature look)? I like to think that Chanel is such a beloved global brand that everyone feels a part of it, meaning that rather than marginalization, edification ensues. Still, let’s be honest, when I wear a tikka to go out, I am going to look culturally insensitive. If I dress in the new Salzburg line, I might seem eccentric, but not insensitive. Is it because both American and Austrian culture are predominantly “white” and historically empowered? Then again, India was dominating the power food chain way back when, and far as forming a people majority, has America beat by nearly 1 million. Given that China and India have the two largest world populations, can Americans borrow from them? Should we feel sorry for the Austrians who come in at 95th in terms of population (and never borrow from the Vatican, at 245/247)?

Alternatively, is it okay for Lagerfeld to use these parts of culture because people trust he will do justice to their history? Or do they not feel that he is robbing them and accept that he is melding cultures? Thus, they give him the okay, and it’s not cultural appropriation. Then again, how do people give an okay, here? Just by not dissenting?

How can we positively borrow from another culture in a way that the galloping masses can digest and regurgitate it (as fashion so often does). Is there a positive way to experiment with reference to foreign sources? And if not, what entitles fashion (which is seemingly global) to unjustly ignore the customs of different groups? I am of the opinion that fashion should be a conglomeration of the palate of the world. But if it is, can only locals use it, and/or wear it?

I would love to hear your input. Clearly I haven’t solved anything here, but when I look at the Austrian feather hat, it seems to me the marginalization of a richer culture for the kitschy mass consumer (and let’s throw Sisi in there for good measure), or if it’s not, why is anything else? Thanks for reading!