Beyond the Fountain of Youth, St. Augustine is a quirky little town that I didn’t feel I was able to adequately expound upon in the last post. While I was there, I read a short biography on Henry Flagler, specifically as it pertained to his St. Augustine hotels. For those of you who’ve heard his name (or maybe haven’t) rather in connection with the prominent liberal arts college in the middle of Old Town or further South, if you’ve visited The Breakers (included on the 1,000 Places to See Before You Die), his story bears repeating, if for no other reason than to understand the development of the Eastern coast of Florida into the vacation spot it is today.

An American self-starter, Flagler was primarily in the grain industry when John D. Rockefeller approached him, asking for a loan on an oil refinery. That investment put Flagler on the ground floor of the partnership that would become Standard Oil. As the company grew, Flagler maintained his seat on the board, but eventually his interests were drawn elsewhere. After a series of trips to the Jacksonville/ St. Augustine area, Flagler hatched a plan to create an “American Riviera.” St. Augustine, with its compendium of historical draws, recreation (to be found on nearby Anastasia Island), and local flavor fit the bill. His plan was hatched, which included building a state-of-the-art luxury hotel in the middle of St. Augustine, which would be connected to New York by way of the Florida East Coast Railway (the amalgamation of a number of local railways Flagler bought to connect to the larger railway systems up North). Thus, the train would drop off pleasure-seekers in his backyard, as long as he could provide accommodation. 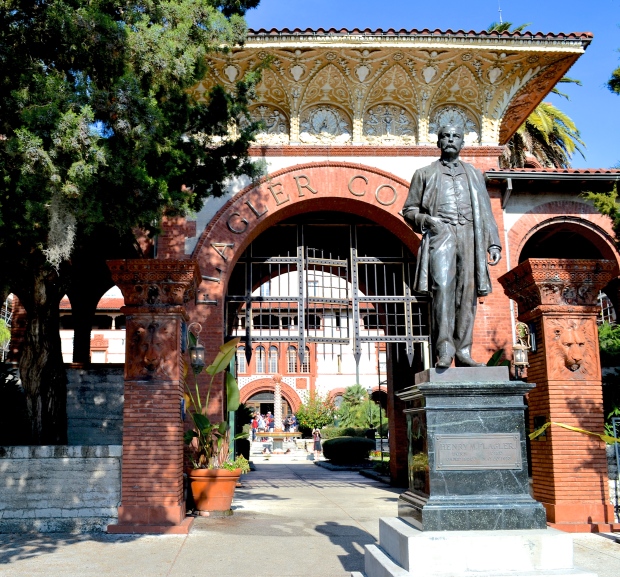 This accommodation began with the Ponce de Leon Hotel, an American palace that played host to the likes of  Mark Twain, Babe Ruth, and four presidents. It also inaugurated the tradition of Red Brick (thank you Carrere & Hastings) that is commonly associated with the Spanish Renaissance style of architecture seen throughout Florida today (did anyone say Grand Floridian?). Flagler went on to build the Alcazar Hotel (directly opposite) and acquire the Casa Monica Hotel to round out his St. Augustine holdings. But neither the Depression, nor the course of history was particularly kind to the burgeoning Riviera. Though it enjoyed about 15 years in the lap of luxury, the same elements that drew people to Florida projected them south. St. Augustine, the first stop into Florida, has cold winters by Floridian standards, and Vacation-goers looking to escape the chill, continued onwards to Palm Beach and Miami, leaving St. Augustine in their stead. Luckily, the astute businessman that Flagler was, he expanded with the times, and built hotels down the coast, making him one of the patriarchs of Miami.

Still, his monolithic vision was left in the wake, mausoleums to the pleasure-seekers of yesteryear before the belt-buckling thrift of the depression set in. the Ponce de Leon was converted into Flagler College. The Alcazar (once home to the largest indoor pool in the world) converted into the Cafe Alcazar and hosts the Lightner Collection in its front section. Ironically, the Casa Monica, notoriously working in the red in its day, continues on as the only hotel on the block (but don’t get me started on B and B’s).

Tiffany glass detailing. The Tiffany Glass Company was actually founded in order to provide glass for the Ponce de Leon.

Detailing on a mirror inside the Casa Monica. It is decorated in the Moorish style.

Here is the Cafe Alcazar nestled in the deep end floor of what was once the largest indoor pool in America.

Old Town (After all,  it is the oldest Spanish colony in America.) 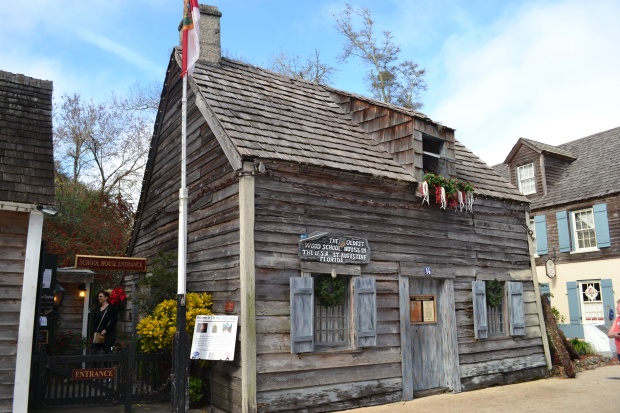 View from the Fort.

Huguenot graves, although the sign says that Huguenot meant “not Catholic” rather than the French Huguenots that might come to mind.

National Geographic has named this street in St. Augustine, the “prettiest street in America.” What do you think? 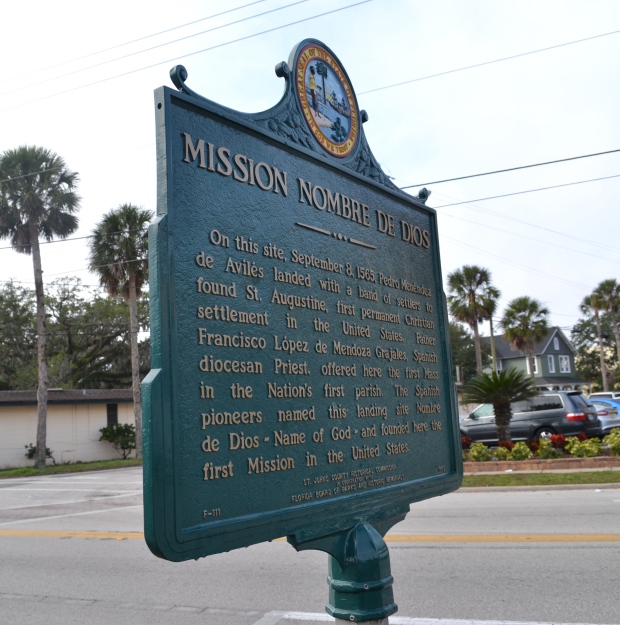 I’ve left out so much great stuff focusing on the more decadent expansions of industrialism. Not pictures are wonderful bits like the Lions Bridge, St. Augustine Fort, Villa Zordaya, and the iconic Anastasia Island lighthouse. I guess I’ll just have to go back…