I am now officially home from England, but I probably have another week or two of posts (depending on my procrastination) to put up before the landscape changes back to Georgia. I’ll get to the bittersweet bits later.

In the meantime, I thought I’d share my experience riding the Eye at night and eating at the OXO Tower. I’ve ridden the eye twice during the day (though once was arguably near dusk), and both times the view has been fantastic. However, what happens at night that you don’t get during the day is better signaling. During the day, all the buildings are equally lit, making the important ones vaguer and less distinguishable at first glance. At night, all the lights go out, except the important ones. Okay, that may be an exaggeration, but it is easier to identify the more relevant places, as generally they are the ones whose lights stay on. Even still, there are a lot of lights. Come on, this is London we’re talking about.

Next, I walked down the Bankside (past an adorable Christmas market installed for the season) to eat at the fabulous OXO Tower. A quick fun fact that I ran across the other day– the OXO Tower was originally a power station (to rival Battersea) but was purchased in the 1920s by Liebeg Extract of Meat Company, producer of the OXO Cube. At the time, there was a ban on skyline advertising, so in converting the old power station, windows in the shape of “OXO” were added to establish a sort of advertising dominance across the central London skyline. Though the company has passed, the windows have become so iconic that they survived a 1970s plan to demolish the building.

Today, there is a brasserie and restaurant (recommended in 1,000 Places to See Before You Die) sponsored by Harvey Nichols. We ate in the brasserie (it was about 10 pounds cheaper per person), and I was very delighted. You can see my meals below. I especially like the cider soaked pear. 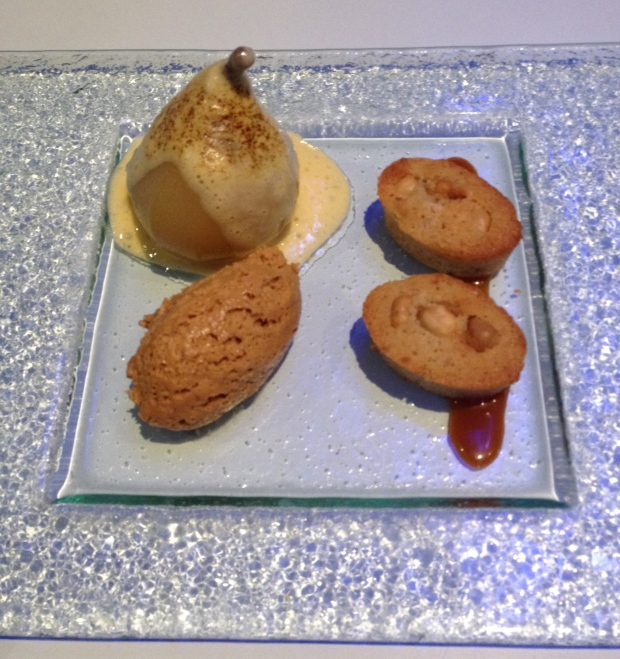